If Martin Luther King Jr were alive today, politicians would denounce him - Opinion

Modern day Republicans and Democrats often speak as if they love King, even as they excoriate the real heirs to his legacy. 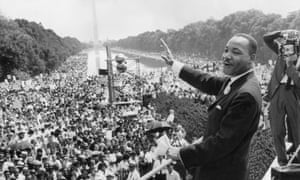 Today is the day American many politicians pretend to care about the life and legacy of Martin Luther King, Jr, one of the wisest souls who attempted to save this sorry nation. Don’t fall for their scams.

While King did care about black and/or poor people in the United States and around the world, he was no American exceptionalist. “Don’t let anybody make you think God chose America as His divine messianic force to be a sort of policeman of the whole world,” King once said.

And yet, modern day Republicans and Democrats often speak as if they love King, even as they excoriate the real heirs to his legacy: the Black Lives Matter activists and other social justice warriors who fight for racial and economic liberation. But the truth is, many of these American politicians would have hated King when he was alive as much as they hypocritically dishonor his radical legacy today.

Take President Trump, who signed a bill a week ago turning King’s birth place into a national park, only to viciously refer to immigrants from El Salvador, Haiti and all countries as Africa as “shithole countries” a few days later – stirring up the kind of racist hatred King died trying to defeat over the weekend the nation remembers him.

Take Democrat Senators (who love to talk about loving King) and who recently voted for a $700bn war funding package this fall, the kind of bill King would have excoriated as part of “the three evils of society” – “the giant triplets of racism, economic exploitation and militarism.”

Our war-loving politicians would not have liked when King got all up at Riverside Church a year to the day before he was assassinated to deliver his most powerful speech: “Beyond Vietnam.” They’d have cringed when he criticized American imperialism, warning “if we continue, there will be no doubt in my mind and in the mind of the world that we have no honorable intentions in Vietnam” and that “the world now demands a maturity of America that we may not be able to achieve”.

If he’d lived past age 39, King would have been offended by Trump calling Haiti a “shithole” country and saying Haitians “all have Aids”. But King would have been equally angry about the exploitation of Haiti for centuries – by enslavement, by colonial plunder, and even by “respectable” US Republicans like George HW Bush.

It was under Bush senior in the early 1990s, after all, when the US intercepted hundreds of fleeing Haitian refugees, sent them to a makeshift prison at Guantanamo Bay (this, not 9/11, is how Gitmo became an indefinite detention center), tested them for HIV, and sterilized the HIV positive women without their knowledge or consent. 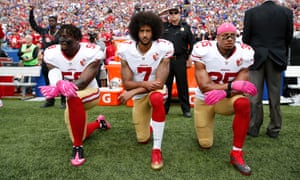 ‘If he were here today, King would be down on his knees with NFL protesters questioning the premise of the National Anthem.’ Photograph: Michael Zagaris/Getty Images

If King were alive today, American politicians would likely be enraged that he was unhappy about the tax scam bill or the Dow hitting 25,000, and they’d be aggrieved when he got angry about Walmart laying off thousands of Sam’s Club workers with no notice and states wanting to add cruel work requirements to Medicaid for people who can’t work.

As often as American politicians are always saying they wish Ferguson or NFL protesters did things “more like King”, white Americans have never really liked any kind of racial protest, and didn’t especially like King when he was alive. They didn’t like him marching at Selma or helping run a bus boycott in Montgomery. The didn’t like him organizing a Poor People’s Campaign to try to bring together economically exploited people of all races. And they certainly didn’t like him showing up in Memphis to help sanitation workers strike for better working conditions after two of their own, Echol Cole and Robert Walker, were killed on the job.

As beautifully depicted on the cover of this week’s New Yorker cover art, “In Creative Battle” by Mark Ulriksen, if he were here today, King would be down on his knees with NFL protesters questioning the premise of the National Anthem and protesting militaristic jingoism. He’d have been with Eric Garner, as he told the police to stop harassing him.

And he would have been with “unbought and unbossed” Erica Garner, as she fought police until her sadly premature final breath at just 27.

As you listen to American politicians from both parties invoke MLK this weekend, think about if their actions live up to King’s vision of justice – and push them as hard as he would have when they fall short.